DAY 01: SINGAPORE - DELHI
Depart from Changi Airport on Jet Airways (9W 17) to New Delhi, the capital of Modern India, upon arrival at International airport meet and greet before transfer to hotel for overnight stay. 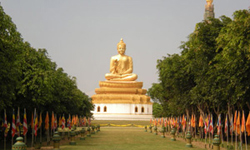 After breakfast, transfer to domestic airport for flight to Lucknow. Upon arrival, there will be meet & assist before continue to Sravasti. Journey will take approx 4 hrs covering 170KM. After check in at hotel, Tour of Sravasti-The place where Lord Buddha performed Miracles will commence.
Sravasti (Sahet Mahet), the capital of the ancient kingdom of Kosala has the honor for sheltering Buddha for 24 rainy seasons in the Jetyana Vihar (Means Jetvana Garden). Vihar was offered by a wealthy merchant Anath Pindika. This holy place also has the Anand Bodhi Tree. Which is also said to have been planted by Buddha's main disciple, Anand. Overnight in Sravasti 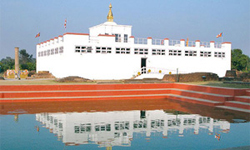 After breakfast, we will depart Sravasti for Lumbini, Nepal. The journey will cover 225KM and will take an approx 5 hours by road. After crossing the India/Nepal Boarder for Visa/Immigration formalities, we will arrive at the little village of Lumbini. On arrival at Lumbini, check in at hotel. After a short break, we will visit the Birth Place of Lord Buddha. Lumbini is situated in Kapilvastu district of Lumbini Zone, the western Teria of Nepal. Here in a grove of Sal trees, Queen Mahamaya gave birth to Gautama, the Buddha. Emperor Ashoka, in his 21th year after his coronation, visited the birth place and raised a pillar on the spot. Visit the remnants of an old monastery. Overnight in Lumbini. 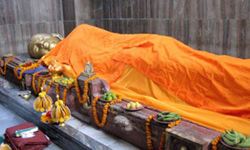 Morning after breakfast, we will leave for Kushinagar, (from lumbini to kapilvastu approx 85km) Kapilvastu (Piprahwa) is the capital city of the Sakya clan and one of the earliest republics. It was in Kapilvastu that Lord Buddha spent his childhood. Lord Buddha saw sorrow, pain, diseases and death. But finally, he saw a radianthappy Sadhu who conquered all these, since then he decided to renounce all worldly riches and pleasures to seek truth and embark on the path of salvation. This place holds significant value for Buddhist pilgrims and has several stupas. The archaeological excavations has revealed stone caskets containing relics believed to be that of Buddha's.
Continue your journey to Kushinangar (approx 148km, estimated 4 hours drive). The Holy Place of Mahapari Nirvana, it was here, the Tathagata, reciter of truth, breathed his last words "behold now, brethren, I exhort you, saying, decay is inherent in all component things! Work out your salvation with diligence!" A temple dedicated to the event-the Mahaprinirvana temple today stands amidst a serene "Sal" grove, as if still reminiscing the great demise. Also visit
Ramabhar Stupa, which is supposedly, the spot where Lord Buddha was cremated. See the beautiful statue of Reclining Buddha. Also visit, Mukutbandhan Stupa built by Malla Dynasty to house Buddha's relics after cremation. Overnight in Kushinagar.
Day 05: KUSHINAGAR – VAISHALI – NALANDA – RAJGIR (B,L,D)
Morning after breakfast, leave for Rajgir via Vaishali. Vaishalibelieved to be the first republic of the World. Having an elected body of representatives, It holds a special significance for Buddhist devotees. The excavations carried out in Vaishali have brought to light Buddha Stupa 1 and 11 (14th century B.C) built in brick with a casket containing some ashes of Lord Buddha. Emperor Ashoka erected a huge pillar to commemorate the spot of the last sermon. Overnight in Rajgir.
Day 06: RAJGIR – NALANDA - BODHGAYA (B,L,D) 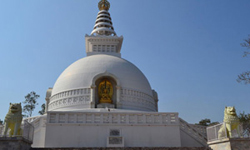 After breakfast, leave for Bodhgaya, enroute to Nalanda. Founded in the 5th century B.C. Nalanda was one of the World'sgreat universities and an important Buddhist center until it's sacking by the Afghans in the 12th Century. It is said that over 10,000 Buddhist monks and students resided here. The extensive brick built remains include few intact votive stupas around it and the monks cell. An archaeological museum houses the Nalanda University seal, sculptures and other remains found on the site. After lunch at Rajgir, sightseeing of Gridhrkutta Mountain (Vulture's Peak), Venuvana and Bimbisara Fort. Afternoon, we will continue our drive to Bodhgaya. Check in to hotel upon arrival. Overnight in Bodhgaya.

Day 07: BODHGAYA (B,L,D)
Bodhgaya is a religious site and place of pilgrimage associated with the Mahabodhi Temple Complex. Bodhgaya is the most important of the main four pilgrimage sites related to the life of Gautama Buddha. In 2002, Mahabodhi Temple, became a UNESCO World Heritage Site. 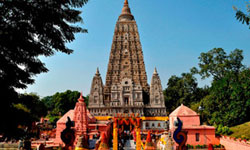 Gautama Buddha, a prince of a tiny kingdom on the Indo-Nepal border, became seer 25 centuries ago, as dissatisfied with life, he wandered for many years and came upon a spot in a forest where he sat under the Bodhi tree. The saplings of which can still be seen in the temple premises. There in a burst of illumination, he discovered the meaning of existence and became Lord Buddha. The place is Bodega. It will be a full day visit of the Mahabodhi temple is a complex of many cultures. The highlight of the temple include tall stone lotus, figures of Buddha sitting in different postures on the walls, his footprints on the stones and a colossal golden Buddha in the sanctum sanctorum. The Bodhi Tree is situated in the premises of the temple, is the one under which Buddha attained illumination. White, Green and Red flags tied onto the tree to form a canopy over seven sacred shrines, which symbolize the seven weeks that Buddha spent here. Overnight in Bodhgaya.
Day 08: BODHGAYA - VARANASI (B,L,D)
After breakfast, depart for Varanasi (approx 275km, 6 hours by road). 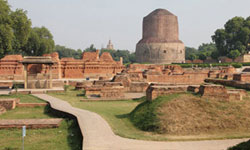 Varanasi is probably the oldest living city in India and one of the world's most ancient. It was known earlier as Kasi, the city that illuminates. The present name is probably derived from the fact that it is situated on the confluence of the rivers Varuna and Asi – Varanasi is a city that cannot be described, only experience. Onwards to Sarnath, 10km from Varanasi, is the blessed locale where more than 2,500 years ago, Buddha chose to deliver his first sermon after attaining Nirvana. The Great Emperor Ashok erected magnificiant stupas, and monasteries here, which are now in ruins. However, the 34 meter high Dhamekh stupa still marks the spot where the Master first preached. Besides Dhamekh stupa, Sarnath also has ruins of Dharmajajika stupa, Dharmok stupa, built more than 2,000years ago.
At Sarnath smooth glistening stone pillar, called Ashok Pillar. The lion capital on top of this pillar built is now the National Emblem of India. Manay ruins survive including shrines built by Great Indian Emperor Ashok (272-232 BC). A Modern Sri Lankan temple contains Japanese Buddhist paintings. Later that afternoon, return to Varanasi for Aarti Puja prayers dinner. Overnight in Varanasi.
Day 09: VARANASI – DELHI (B,L,D) 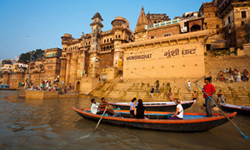 Early morning 0545hrs visit bathing Ghats. Take a boat ride on the holy River Ganges, exposes one of the most carefree, colorful and revered aspects of hindu life as the sunrise over the far banks, the Ghats come alive with rituals of Hindu worship and sounds of temple bells. A walk through narrow lanes, past the gold plated Vishwanath temple. Visit the Bharat Mata Temple, Durga Temple, Emperor Aurangzeb Mosque, drive past famous Benaras Hindu University with it's marble Shiv temple and drive through the busy shopping streets to enjoy some free time shopping for Baneras silk materials. Benaras is famous for its Silk Brocades and beautiful Benaras Sarees. Transfer to the airport for flight to Delhi in the afternoon, on arrival transfer for some shopping in Sarojni Nagar Market area. Overnight in New Delhi.
Day 10: DELHI – SINGAPORE (B)
After Breakfast, transfer to airport for your flight home from Delhi to Singapore (9W 18). It was "The Joy of Flying" with you on Jet Airways. Home sweet home with holy blessings of Lord Buddha.